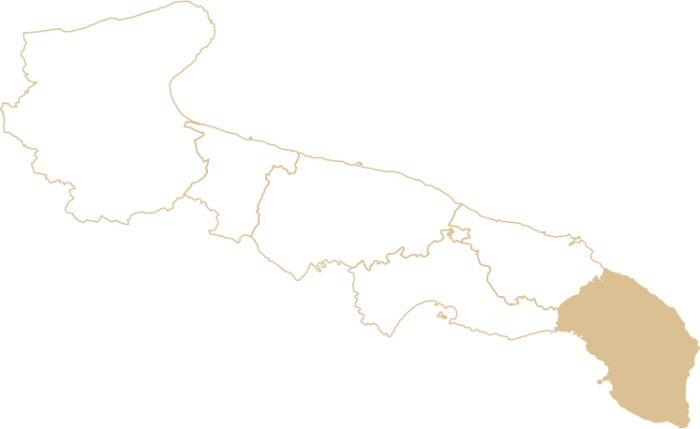 Salento is a macro-area of Apulia and is the southern-most region of Italy. It covers the entire province of Lecce and extends northwards to include parts of the provinces of Brindisi and Taranto. Bathed in the east by the Adriatic Sea and in the west by the Ionian Sea, Salento is a flat terrain with olive groves, white beaches, farmhouses and vineyards scattered across the landscape. Although it has always been open to innovation, Salento is deeply rooted in its history and folklore, from the traditional cuisine, pizzica (traditional Salento music DANCE), the baroque architecture, the festivals and patron saint celebrations, textile and papier-mache articles, all of which are facets of the area that over the years have become points of strength and attraction for tourists and locals alike. This landscape, historical and cultural heritage is enhanced by the temperament of the inimitable Salentines PEOPLE FROM SALENTO o SALENTO PEOPLE who are renowned for their hospitality and warmth and their willingness to embrace newcomers wanting a taste of their land. Salento is a very sunny land with a Mediterranean climate characterised by long summers and constant sea breezes that blow perpetually through the vineyards contributing to the health of the grapes with their pest-controlling action. The soil is predominantly clayey in nature, but there are also fine, chalky soils, with reduced thickness and good drainage, and red, stony soils, rich in minerals, so that the entire area is the perfect habitat for various varieties of grape. The main wine production is red-berried grape varieties. In fact, Salento reigns supreme for the Negroamaro, a native variety that has a rich flesh PULP and compact bunches.

In the heart of this enchanting territory lies Leverano (“Liranu” in the local dialect), known as the “city of flowers”, , an active agricultural centre with approximately 14,000 inhabitants. Extending across a fertile plain, a few kilometres from the Ionian coast, Leverano sets itself apart by its outstanding production of wines, oil, fruit and vegetables and flowers. The coat of arms and symbol of Leverano is the Tower, 30 metres high and erected by Federico II of Swabia FREDERICK II in 1220 to defend the populated town and coast during the pirate attacks. Other places worthy of note are the 16th century Chiesa Matrice, an example of the transition from the renaissance to the baroque, the Chiesa di Santa Maria delle Grazie with the annexed convent of the Friars Minor and the many fortified farmsteads FARMHOUSES, CALLED ‘MASSERIE’, many of which have now been converted into accommodation facilities. The mild climate and fertile land encouraged the Zecca family to settle in this area in 1580 and undertake their business endeavour, culminating in 1935 with the building of the cellar, helping to make Leverano, together with other local entities, one of the most active agricultural centres of the area. Leverano is now a dynamic town, where cultural events and entertainment take place every year, bringing to life the charming historic centre and other areas of the town. Leverano has recently seen an increase in tourist numbers, given that it is a strategic distance from the renowned towns of Porto Cesareo, Lecce or Gallipoli. The companies in the agro-food and manufacturing industries have made Leverano an interesting town in terms of trade, laying the foundations for the establishment of a bona fide district of excellence.

4ª Sunday of May:
“Cherry Fair”, linked to the festivities of Our Lady of Consolation; in the past a major livestock fair was held.

From June to September:
Various cultural and food and wine events take place in the Leveranese summer. One of these major events is the renowned European “Birra&Sound” (Beer and Sound) festival celebrating beer and the civuoleunPAESE festival of independent music

16th August:
Festival of the Patron Saint of S. Rocco

First half of November:
“Novello in Festa”, food, wine and music showcase with tasting trails.